Through the Yiddish Looking Glass: The Art of Yiddish Children’s Literature 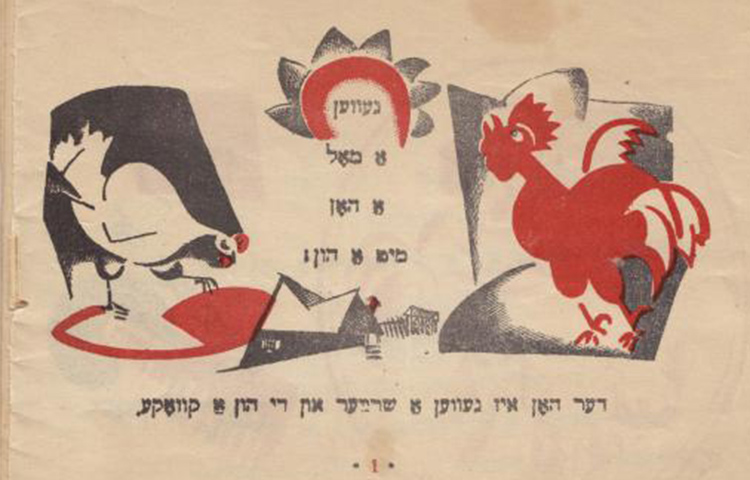 Children’s books weren’t the first Yiddish publications to include modernist illustrations. In fact, it was in the Yiddish poetry and literary anthologies of the early 20th century that we find art accompanying text. It is of note that many of the same artists whose work adorned modern works of literature also drew fantastic illustrations for Yiddish children’s books.

Those who illustrated Yiddish children’s books often produced brilliant work, and some had exemplary careers in the fine arts. A few of them were cartoonists, and others painted theater sets. Many of their illustrations can also be found in Yiddish periodicals and literary journals. With their small pen and ink contributions, these sometimes unheralded artists brought an aesthetic sensibility to the cramped spaces of Yiddish newspapers and magazines. Their work in Yiddish children’s books, unknown to many today, is often stunning and unique.

Yiddish children’s books were published worldwide and comprise a significant component of Yiddish literature as a whole. Some of the most brilliantly illustrated children’s stories came to us from the Soviet Union, although the works that were published in North America were also handsomely designed and contain beautiful illustrations as well.

During the first half of the 20th century—the heyday of Yiddish publishing—hundreds of children’s books appeared, many of them illustrated. Both their stories and the art that accompanies them is very much worth exploring. One small aspect of the Yiddish universe, these works offer some of the most wonderful art found in literature and reflect the explosion of creativity that was taking place in the Yiddish imagination.

This exhibit closed on
Wednesday, January 31, 2018